Joseph became a POW on April 9, 1942, and went to Camp Cabanatuan and died on board the Arisan Maru.

Information states that Skipper Edward Noe Blakely ( Annapolis, class of 1934 ) was in command of the U.S. submarine Shark ( second U.S. Navy sub of that name ) when it torpedoed a japanese freighter that was carrying about 1,800 POW’s from the Philippines.

All but eight POW’s were lost. Five somehow got to China and made contact with friendly forces, reporting the tragedy. Counting the work of Paddle on September 7 and Sealion, Growler and Pampanito on September 12, this new loss meant that U.S. submarines had accidentally killed or drowned well over 4,000 Allied POW’s within a period of six weeks. Perhaps more went unrecorded.

Joseph H. Adkins died when the Arisan Maru got Torpedoed and Sunk in the Chinese Sea at, Oct 24, 1944 and he is honored Posthumous the Purple heart, Silver and Bronze Star Medal, American Campaign, Victory Medal the Combat Infantry Badge and the POW Medal. 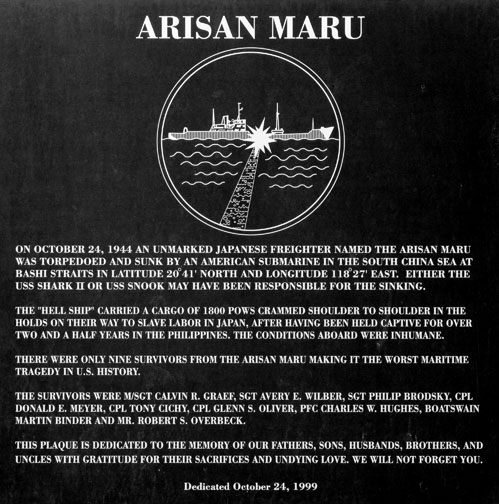