Parents and Siblings, no record.

William enlisted the Navy in Iowa with service number # 3214668.

William’s rank/duty was a Seaman First Class on-board the USS Canopus AS-9.

William was Killed in fighting ashore with the 4th Marine Battalion, after the USS Canopus was scuttled  on May 6, 1942, Seaman First Class William F. Allard is honored with a Purple Heart a Combat Action Ribbon.

The Battle of Corregidor, fought May 5–6, 1942, was the culmination of the Japanese campaign for the conquest of the Commonwealth of the Philippines during World War II.

The fall of Bataan on April 9, 1942 ended all organized opposition by the U.S. Army Forces Far East to the invading Japanese forces on Luzon, in the northern Philippines. The island bastion of Corregidor, with its network of tunnels and formidable array of defensive armament, along with the fortifications across the entrance to Manila Bay, was the remaining obstacle to the 14th Japanese Imperial Army of Lieutenant General Masaharu Homma. Homma had to take Corregidor, since as long as the island remained in American hands, the Japanese would be denied the use of Manila Bay, the finest natural harbor in the Far East. 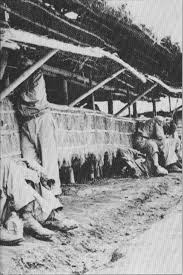