Charlie enlisted the service in Texas with service number # 8390761.

Unknown Postwar Japanese records indicate that Scamp may have been sunk by air and escort ship attacks on 11 November, but it is also possible that she hit a mine. She was reported as presumed lost on war patrol 21 December 1944 in enemy waters.

Most of the crew were officially declared KIA Dec. 6 1945

In order to provide rescue services for downed aviators during Saipan-based B-29 assaults on Tokyo, Scamp was ordered to lifeguard duty on 14 November.

On 16 November two attacks were made by the Japanese, one in 32°-10’N, 139°-30’E, the other in 29°-21’N, 141°-30’E. Amplifying data on these attacks reveal that on the latter attack, “Great explosive sounds came as a result of this attack.” It would seem then, that Scamp was attacked several times during her period of life-guard duty. Whether she was badly damaged and with-drawing from the Japanese coast at the time of the last two attacks, is impossible to say. No attack cited here ties in with any anti-submarine attacks reported by submarines returning from patrol. It is probable that damage to Scamp became progressively more serious as she absorbed each successive attack, and she may have been withdrawing from the Empire without transmission facilities when the end came.

Thanks to Mr.J. Dowdy 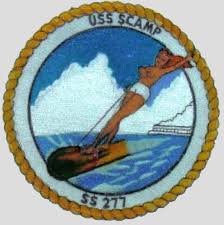